"A blank spot on the map is an invitation to encounter the natural world, where one's character will be shaped by the landscape. To enter wilderness is to court risk, and risk favors the senses, enabling one to live well.
...The time had come to protest with the heart, that to deny one's genealogy with the earth was to commit treason against one's soul."
-Terry Tempest Williams, Refuge 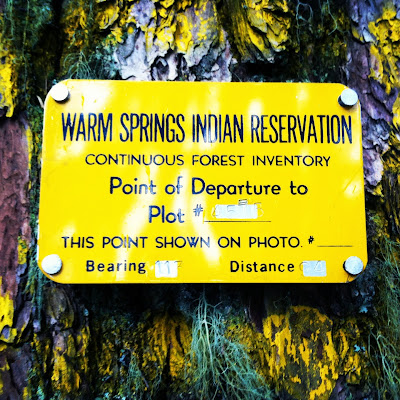 I laid on the cot and drifted in and out of napping because I was tired already from the weekend.  Some of the runners who came through thought I was a fellow racer and that I was injured and dropping out.  I wasn't injured, just cold and damp and somewhat bored out in the dark woods under an event tent set to half height in the midst of a monsoon.

Bryce and Heather sat in chairs across from me; music played from the small speakers on the iPhone and the bourbon was gone.  The sound of the storm was constant and my sleeping bag was wet but it didn't matter anymore, I kept it around me regardless.  Miserable but fun...that about sums it up.  We were happy to serve the ultra marathoning, trail running community.  Crazy group of freaks that they are.

Aid Station #10--Little Crater Lake--at the inaugural Mountain Lakes 100 was our outpost in the madness.  We'd hiked the gear out from the cars on the thankfully short, 1/4 mile trail, passing the namesake Little Crater Lake (a stunning geologic oddity) en route, to assist runners on their day-and-night 100 mile journey.  Our station was at mile 60.6 so the runners (if they made it that far) would already be in the thick of it: raw and ensconced in their epic mental and physical battles and hopefully ready for more.

It was raining all day but the latter half of our ~7 hour shift was in a full on gale, a bucking and spitting typhoon.  We'd started our stint out there in the afternoon with the tent at full height, of course, to give us proper head room, but the weather steadily deteriorated and those cold Oregon raindrops began to blow sideways with vigor.  We shortened the legs and dropped it down to save our lives.

The runners at that point (and all points really, since it was driving snow and rain at 6:00 am at the start of the race...12+ hours before) were shining, inspiring, drenched-rat style warriors, soul-shakingly impressive in their resolve and composure given the ferocity of the elements and enormity of the challenge.  60 miles in, "just" 40 to go.

We had a classic orange Gatorade style container on the table to fill the runners' bottles with water and a special, electrolyte-type drink all mixed up and ready to go.  Beside that was the normal array of aid station food: Gu, potato chips, gummy bears, Fig Newtons and so on.  Not "health food" but ultra running food...a somewhat strange bit of counter-intuition.

25 hearty souls made it through our aid station before things really came crashing down.  A headlamp came bobbing through the night, not from the race course but from the direction of the parking lot.  Scott's face emerged out of the dark as he crouched to enter our hovel.

"Race is over," he said.  Pulling the plug, just too gnarly.  Hypothermia was already strengthening its grip on an unjustifiable amount of exhausted, sodden runners, weary from now 14+ hours on the trail, all of it in ~40-50 degree rain.

"Break things down here and drive back to Clackamas.  And Todd wants you," he stopped and pointed to me, "to sweep the trail back to the ranger station and make sure there are no runners in that section."

Well...ok then I guess...looks like it's a wrap.  I guess my night is not over yet either, but then again it wasn't supposed to be.

The plan had been to pace my friend and client--the famed Portland chef Gregory Gourdet--the final 30 miles to the end--through the mad 3-D aquarium that was the first major storm of the '13/'14 fall and winter season.  I must say, although this belies my fierce machismo and typically hyper-sensitive egotism, I was quite relieved not to have to do so.  It would have been so dark and wet and scary...and long! I mean, come on, 30 miles isn't a hundred but it's still a long way.

We packed everything up, broke down the tent and loaded the cars.  I stood at the back of my 4runner, sheltered under the raised back hatch and prepped myself for the short but exciting 6 or so miles back to the ranger station.  I put on some dry layers, filled my water bottle.  Besides keeping an eye out for ailing runners I was going to be taking down the orange ribbon course markers that I had put in place that very morning.

The day before Heather and I had marked the 30 miles from Olallie Lake (the start of the race) to Clackamas Ranger Station, all on the Pacific Crest Trail, past Olallie Meadows, the Pinheads, Warm Springs and Red Wolf.  We camped in the parking lot at the ranger station and then the next morning my friend Matt and I marked the 15 miles around Timothy Lake and the little out and back to the Little Crater Lake Aid Station.  After we marked around the lake we met Bryce and Heather and headed in to set up Aid Station #10.

That was all over, though just a few hours past.  The race was done.  Triage was in effect; I could only imagine what the big aid stations looked like.  I heard stories later: downed trees, fallen limbs crushing cars, haggard, zombie-like runners with blue lips wrapped in space blankets, looking like despondent, tinseled-Christmas ornaments, in need of medical assistance.  God bless their souls.  Dreams were broken and there was plenty of upset but the outcome later seemed good at least.  Spirits were high, the community came together and prevailed once again.  There were no hard feelings.

Storms come, races get cancelled, and sometimes it rains on wedding day.  The whole point of all this trail running, mountain stuff is that we put ourselves in the hands of nature, we let go of the reigns a bit and hand over the keys.  The uncertainty is the thrill.  The unknown is why we partake.  We're not control freaks.  You may be in your normal life, but not out there; you can't be.

I traveled those 6 miles on the PCT back to the ranger station and what remained of the dispersing circus of the dramatic night.  My head lamp lit the narrow trail that was flooded with water.  There were no "puddles" or even anything that could be classified similarly.  The footpath, for long sections on end, was a river; a 6-8" deep pool of brown, earthy ice water.  Wind whipped about, rain drove down, trees swayed wildly.  Movement was everywhere. The energy of the storm was clearly felt.

I grabbed the orange ribbon markers off the branches where I'd attached them earlier with clothes pins.  I swore though that people removed some or they blew away or something; I ran along and began to spook myself, fearing ironically that the trail marker himself was off-trail, somehow, someway lost on some other forest tread through the nameless trees.

Jesus, the PCT is pretty easy to follow.  I've been on this section of it so many times before...WTF?

I was tripping though, literally and figuratively; the storm was getting to me but I was going along just fine.  The creaking, squealing, moaning, groaning trees added a ghoulish ambiance to the experience and helped urge me on despite icy feet and the challenge of running through the constant water.

I was reassured by my progress when I recognized and passed the eclectic camp of crazy men that I'd talked to earlier on the day; hunters and rough necks and the like--not that there's anything wrong with that. These guys were drinking when I came through the first time 12 hours before, and proudly pointed out the array of nudie-pics they'd stapled to the trees around camp.  I told them to watch out for crazy runner types on 100 mile runs through the woods and not take down any trail markers.  I'm not entirely sure they respected the latter request, though they seemed like nice guys.

When I came through the second time they were still stirring, no doubt more drunken than before.  I could only imagine--in my darkest mind--what sort of wild debauchery went down on that torrential night in the camp of pornographic conifers.

I moved on, happily.

I was nearly there at last.  Having run the Mt. Hood 50 and the Timberline Marathon each twice before I knew exactly how long to the end.  I was excited to get out of the storm, stop running, stop wading through icy rivers, get dry, eat food, drink beer hopefully.  I pulled up the last of the markers and coasted into the ranger station.  All of the aforementioned haggard runners had left already, escorted to warm vehicles by selfless friends and family.  Heather was waiting in my car, sitting in shotgun with the windows steamed up.

The very next weekend the weather could literally not have been better.  Absolutely stunning in every way, just ridiculous; blue bird and beyond.  Of course this prompted talk: was that section of the Pacific Crest Trail and its environs cursed for races?  The "100 in the Hood" race a few years before was a disaster and had covered many of the same sections as Mountain Lakes 100.  And with the Warm Springs Indian Reservation right there...it's hard not to ponder: did our "forefathers'" (whatever the hell that means) treatment of the Native Americans have something to do with all this?  Does the blood on our hands make for irate spirits on the Pacific Crest Trail between Olallie Lake and Mt. Hood, along the Warm Springs Indian Reservation?

Fate will be tempted for Mountain Lakes 100 Round #2 again no doubt and maybe with enough penitence well be able to pull it off.  As for the living peoples at least things turned out ok and the community grew ever stronger.

Thankfully for us all, there's always next year.

Mountain City is a place to find writing and/or photos about nature, people, and the interaction between.
I am a writer, photographer, artist, climber, ultra marathon runner and small business owner (Animal Athletics) based in Portland, Oregon.